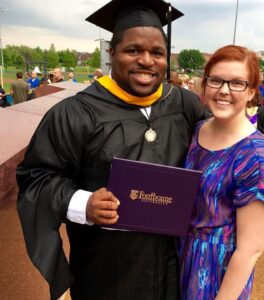 Sterling is a member of Loyola Academy’s first graduating class (2002). He also was the first alumnus to be employed by Loyola Academy when he accepted the position as social studies teacher and later became the first alumnus to serve on Loyola’s Board of Trustees. Following the position at Loyola, Sterling served as Dean of Students for St. Louis University High School. Most recently, Sterling accepted his current position as Dean of Students at Creighton Prep in Omaha, NE. He is pictured above with his wife, Amy, after receiving his M.A from Fontbonne University.